Barring emergency cases, the All India Institute of Medical Sciences (AIIMS), New Delhi on Wednesday suspended regular admissions in the general and private wards of the hospital and all centres through the Out Patient Department (OPD) with immediate effect. The OPD admissions will remain suspended for the next two weeks.

“In view of the need to optimize usage of available inpatient beds for hospitalization of seriously ill emergency/semi-emergency patients, it has been decided to temporarily stop routine OPD admissions to general wards as well as private wards in AIIMS Hospital and all Centres with immediate effect for a period of two weeks which will be reviewed after that,” the statement by the hospital read. 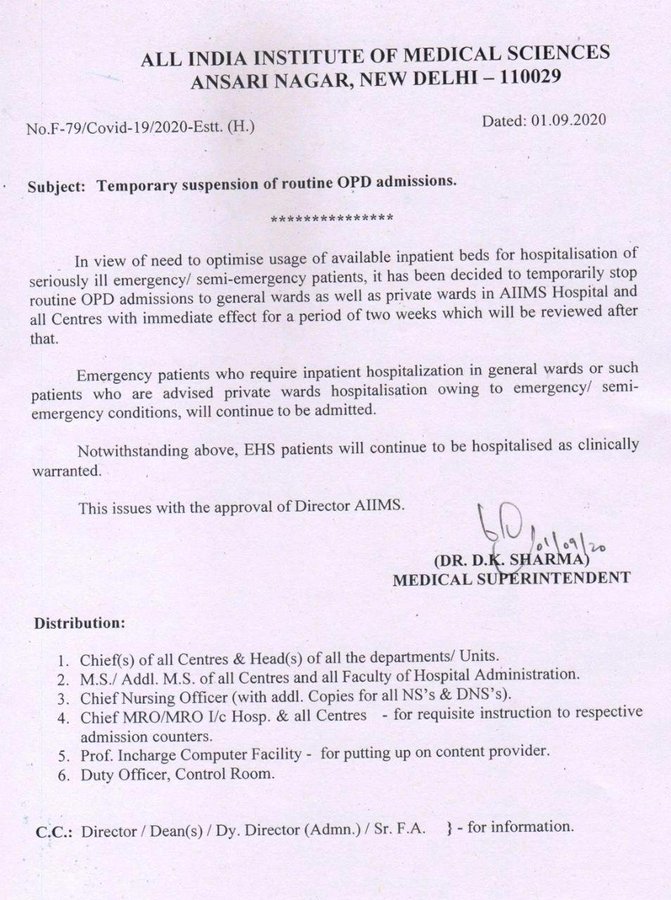 However, the emergency patients who require hospitalization in the general wards or such patients who have been advised admission in private wards will continue to be admitted, the hospital said.

Also, the routine consultations in OPDs would run, as usual, said D.K. Sharma, medical superintendent of the hospital.

Sharma said that beneficiaries of the Employee Health Scheme (EHS) would continue to be admitted as clinically warranted.

He added that the suspension period of the in-patient admissions via OPDs is a subject of review and further extension would depend upon the prevailing situation.