Ayodhya is all decked up for the ground-breaking ceremony of the laying of the foundation stone of the Ram Temple. The Bhoomi Pujan is set to take place today (August 5). The ceremony is expected to begin at nearly 8 AM. The Bhoomi Pujan is very likely to take place at 12:30 PM, while the foundation stone will be laid at 12:40 PM today. Prime Minister Narendra Modi will attend a public function on laying of the foundation stone of ‘Shree Ram Janmabhoomi Mandir’ at Ayodhya. Prior to the function, the prime minister will take part in ‘pooja’ and ‘darshan’ at Hanumangarhi. From Hanumangarhi, he will travel to ‘Shree Ram Janmabhoomi’ where he will take part in pooja and darshan of ‘Bhagwan Shree Ramlala Virajman’.

Prime Minister Modi will also plant a Parijat (Indian night jasmine) sapling. He will subsequently perform ‘Bhoomi Pujan’ and will unveil a plaque to mark the laying of the foundation stone. The prime minister will also release a commemorative postage stamp on ‘Shree Ram Janmabhoomi Mandir’.

Police barricades, yellow banners, walls with a fresh coat of paint and the sounds of bhajan mark parts of Ayodhya as the city awaits its big day Wednesday when the first brick will be laid for the Ram temple. Ayodhya is decked up for the Bhoomi Pujan that will be attended at the Ram Janmabhoomi by 175 people, who figure in a select guest list of seers and politicians topped by Prime Minister Narendra Modi. 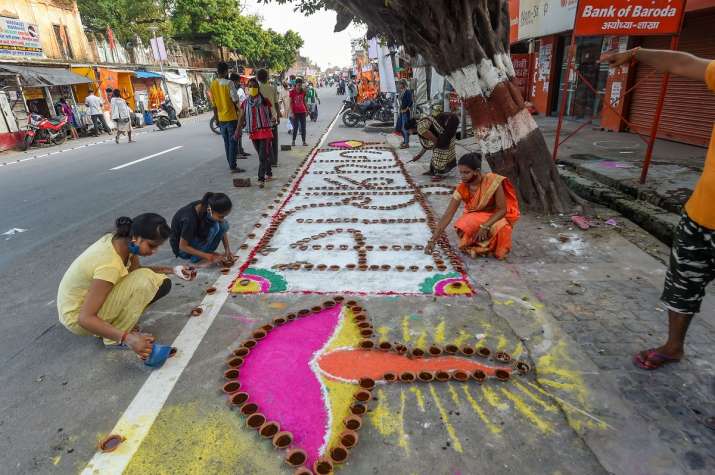 Concerned over the spread of coronavirus, the authorities are encouraging others not to come to the temple town, asking them to mark the occasion by celebrating at their homes. The groundbreaking ceremony will be telecast live.

Roads leading to Ayodhya display hoardings with the picture of the proposed Ram temple and of Ram Lalla, the infant Ram, the deity now housed in a makeshift temple.

Most of the shops in the locality wear a new look, with their fronts painted in bright yellow. A large number of policemen were deployed in the area on Tuesday.

Meanwhile, roads leading into the area are barricaded.

PM Modi along with Uttar Pradesh Chief Minister Yogi Adityanath, Mahant Nritya Gopaldas, RSS Chief Mohan Bhagwat and UP Governor Anandiben Patel will be addressing the public during the ceremony. Senior leaders including LK Advani and Murli Manohar Joshi will attend the event through video conferencing. 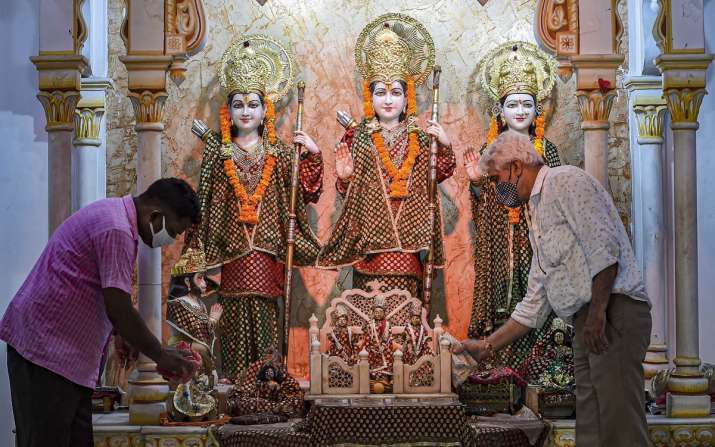 Seven religious leaders from Gujarat have been invited for the ground-breaking ceremony for Ram temple construction in Ayodhya.

The Ram Janmabhoomi Teerth Kshetra general secretary said 175 eminent guests, including 135 seers belonging to as many spiritual traditions have been invited for the foundation stone-laying ceremony of the Ram temple in Ayodhya. Some eminent citizens of the temple town have also been invited.

Also Read | Ayodhya Ram Mandir Bhoomi Pujan: When, where and how to watch live telecast