After attempting to gain a footing within the coveted five-figure price region yesterday evening, Bitcoin faced a slight rejection that subsequently led it lower.

It is important to note that this decline has been tempered – a further sign pointing to the sustainability of this recent uptrend.

Although it now appears that the cryptocurrency could be prone to seeing some further near-term downside, it was able to just confirm an elusive “golden cross” formation.

This pattern is historically followed by significant upside.

The confluence of this pattern’s confirmation and some large buy orders seen overnight both seem to suggest that this ongoing decline will be short-lived.

At the time of writing, Bitcoin is trading down just under 3% at its current price of $9,700.

This marks a notable decline from daily highs of just over $10,000 that were set overnight when the cryptocurrency attempted to break back into the five-figure region.

Although BTC has yet to face any harsh rejections at this price point, its inability to climb into this region for any sustained amount of time does point to some underlying weakness that could cause it to decline lower in the near-term.

This weakness may prove to be short-lived, however, as the cryptocurrency was just able to confirm a highly bullish golden cross formation – as seen on the below chart: 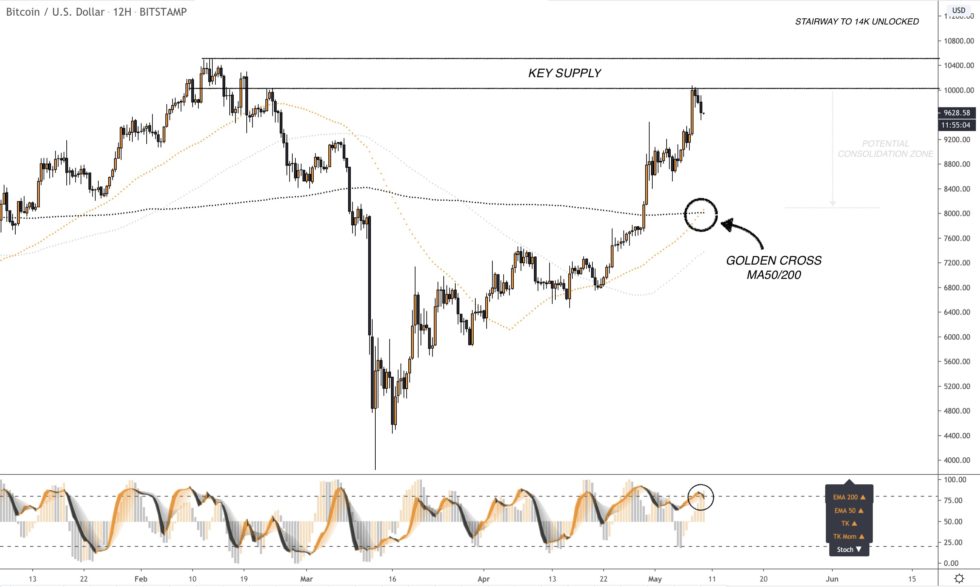 This pattern itself doesn’t necessarily provide the cryptocurrency with strength but is rather a lagging indicator that offers investors insight into an asset’s underlying vigor.

One popular pseudonymous options trader explained that he believes Bitcoin is likely to experience a bout of rangebound trading throughout the weekend.

He also noted that previous signs of weakness were largely invalidated by some large buy orders he noticed across multiple exchanges.

“BTC: Most likely range bound here as we head into the weekend. This was the pullback most wanted. The extended consolidation then breakdown worried me a bit, but confidence grew when I saw big buys come through. Added long 9580~. Eyeing range EQ for partial TP then range high.”

How the benchmark cryptocurrency trends this weekend could set the tone for where it moves in the weeks ahead.