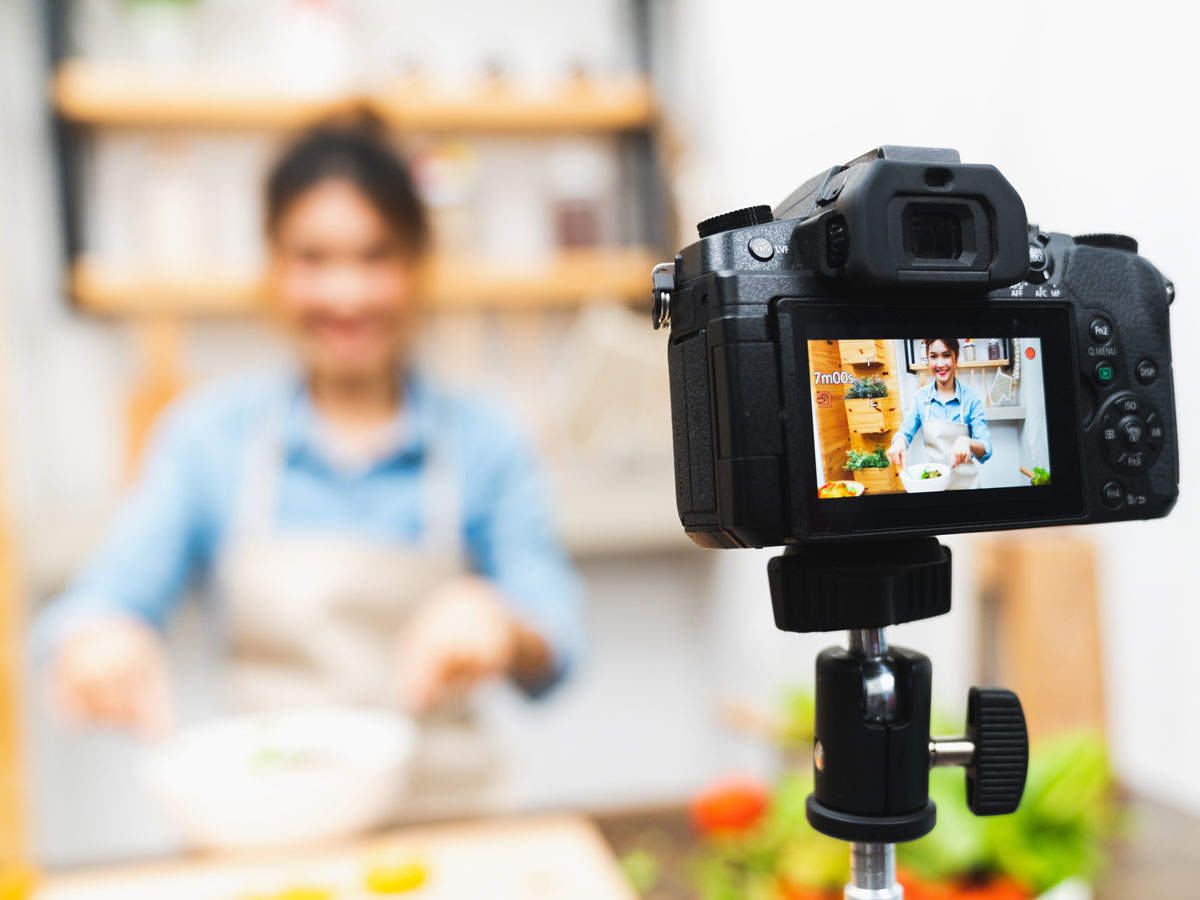 It’s Lockdown 4.0. Everyone knows someone who is fussing about, failing at, or flaunting their culinary skills. From millennials to Gen Z, from Boomers to their seniors, people across age groups and geographical boundaries are picking up the ladle — either for the first time in their life or for the first time in a very long time.

The lockdown-led cooking universe has several worlds running parallel. In one, there is pasta and pride. Another has a surfeit of banana bread — baked and fried. In some, leftovers rule. Yet others are going back to their roots.

As the extended lockdown takes people farther away from the old normal, many are harking back to food that evokes memories of the good old times. So, hundreds of Indians are seeking cuisines redolent of their native communities and hometowns. This, in turn, has made several niche food vloggers into social media stars.

ET Magazine spoke to some of them about how they are staying relevant for this newly acquired fanbase.

North India
Cooking Up A Staple 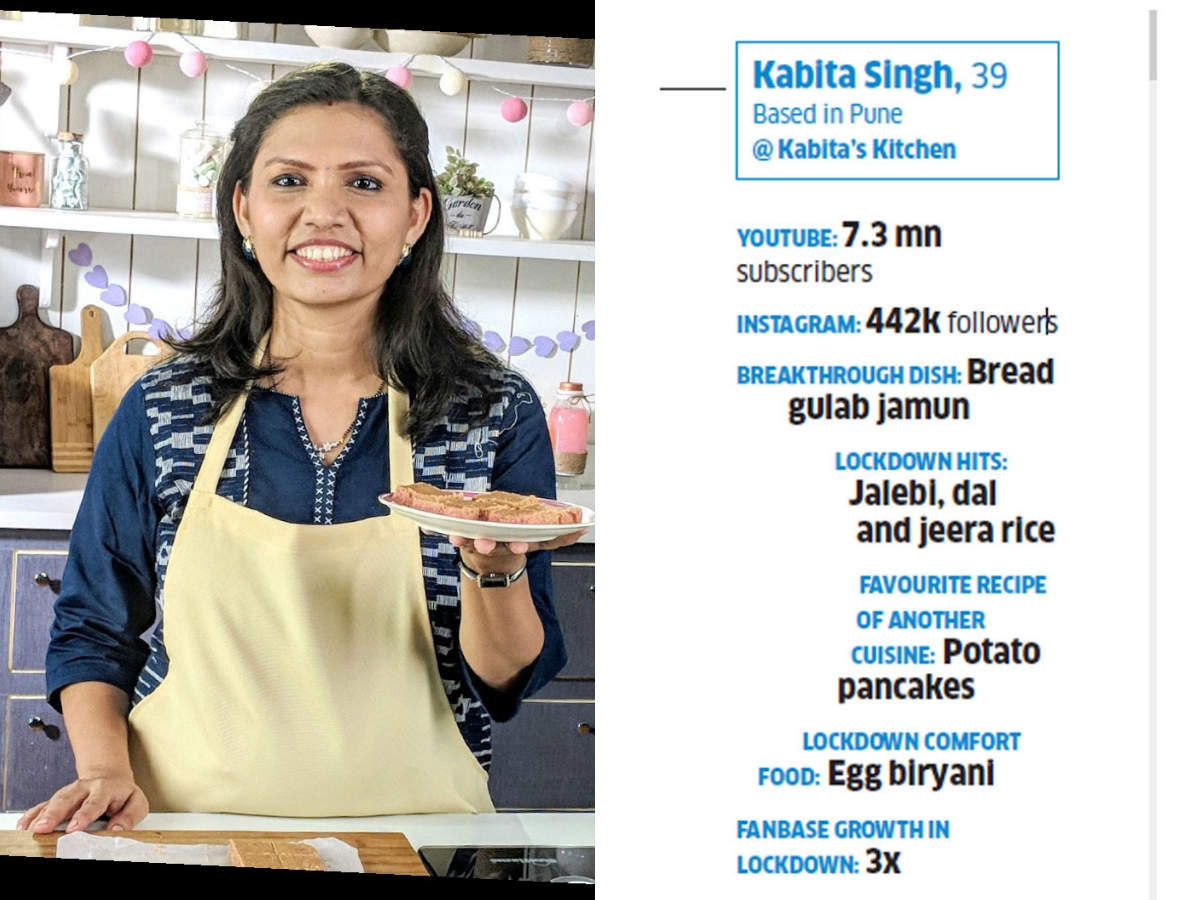 On May 13, 2020, YouTube saw a 950% increase in searches for “jale-bi” in India over the previous 90 days, according to a company spokesperson. No wonder, Kabita’s Kitchen’s Hindi YouTube video on a “lockdown recipe” for “special jalebi” has 6.5 million views and counting.

According to influencermarketinghub.com, the channel’s creator, Kabita Singh has added over 1.08 million of her 7.31 million subscribers during the lockdown.

Kolkata-born and Pune-based Singh is a household name in north India. The 39-year-old’s recipes come with trademark simplicity. During the lockdown, Singh has gone a step further. She is recreating her old how-to videos to help lockdown cooks make ba-sic items like roti, rice and dal. “It is meant for people who don’t even know the difference between jeera and ajwain,” she says.

Like 26-year-old Akhila C from Chennai, who lives alone in Gurgaon and has, by her own admission, “never cooked anything at all, not even rice”. She likes Singh’s in-formal way of telling a recipe.

Singh likes to keep it simple off-camera as well. “It gets tiring making, editing and posting videos every day.” People in her WhatsApp groups are posting pictures of a new dish every day. “I’m making egg biryani for the family every third day,” she says. 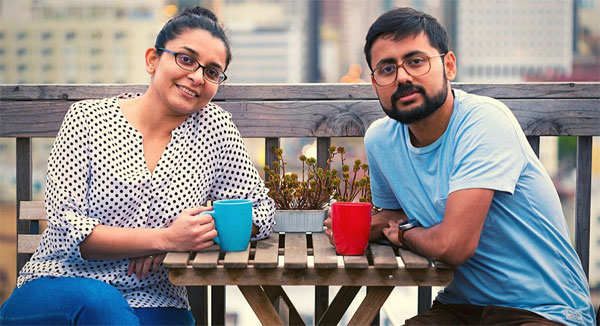 In Mrinalini Majumdar’s family, preparing shukto for special occasions is an old tradition. As old as Hrishikesh Mukherjee’s 1972 film, ‘Bawarchi’, in which Rajesh Khanna offers to make the bitter vegetable dish. Unlike Khanna’s character Raghu in the movie, Majumdar’s culinary skills are only half-baked. So when she had to make the beloved Bengali dish on her mother’s birthday recently, she searched for the recipe on YouTube and came across Bong Eats, a channel run by Saptarshi Chakraborty, 33, and Insiya Poonawala, 34.

“They tell you what to do and also what not to do, which helps a beginner like me,” says the 19-year-old sociology student. She has since cooked macher jhol and kosha mangsho as well. Two of her friends also follow the channel now, she says. With close to 900,000 subscribers on YouTube at present and 37,000 on Instagram, Bong Eats’ popularity has doubled during the lockdown. 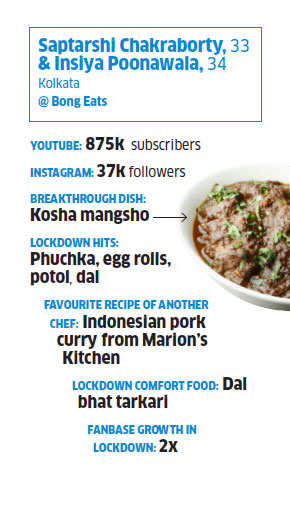 Instead of their usual long videos, Chakraborty and Poonawala are now doing a series of short vlogs on multiple Bengali dishes that make an entire meal. “It gives people a clear picture of what dish goes with what and what doesn’t. Shukto, for instance, doesn’t go with dal,” says Chakraborty. People are also watching their street food recipes like phuchka and egg rolls. Poonawala thinks it is because street food is an integral part of a Bengali’s life and the lockdown has hindered its otherwise easy availability.

Sohom Dawn, 18, agrees. Stuck in Chennai, away from his home in Kolkata, Dawn has been following Bong Eats to make kathi rolls, momos and phuchkas. “I failed miserably the first few times,” admits Dawn, a commerce student. “But it helps that the recipes aren’t intimidating, like celeb chefs’. You feel that you can give it another shot.” 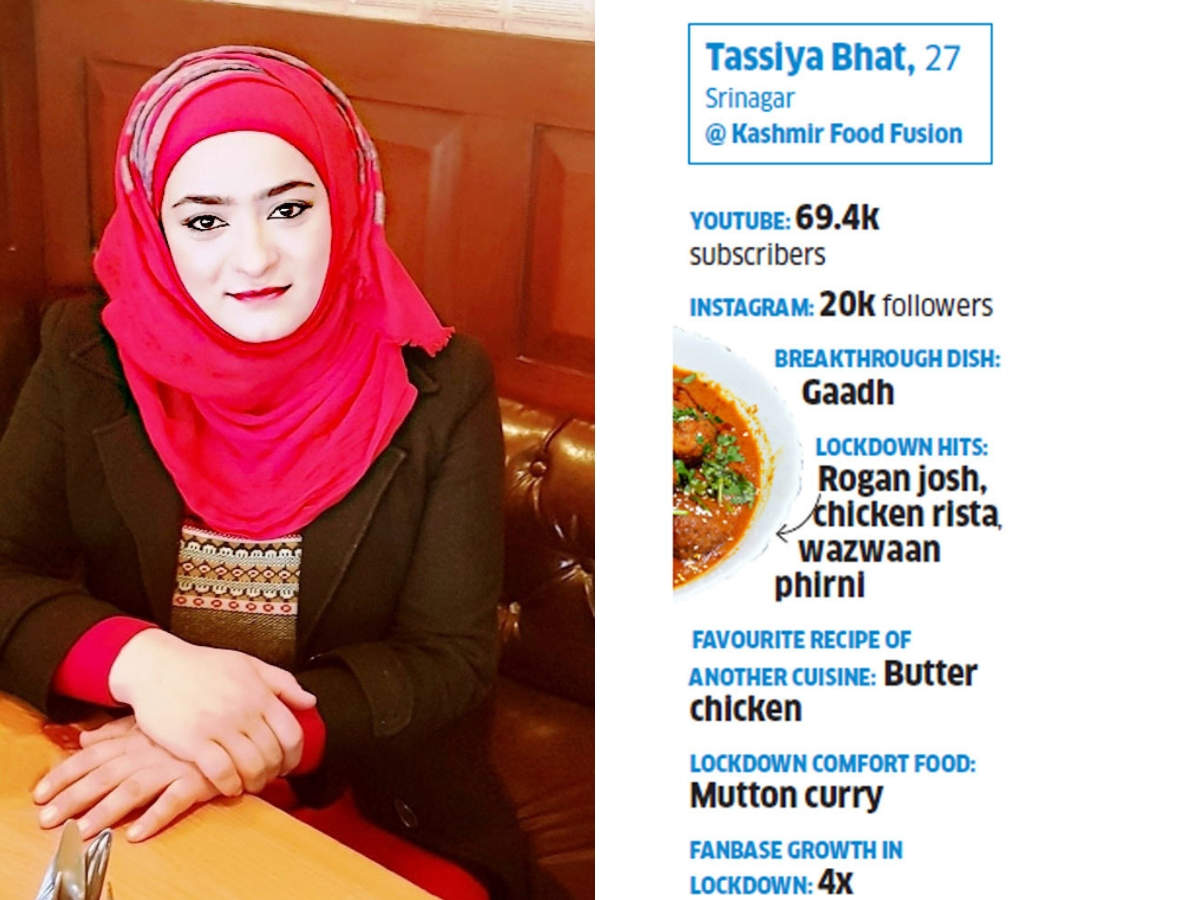 Thank you, ma’am, for making us chefs while staying at home,” writes Faiza Manzoor on Kashmir Food Fusion’s YouTube channel, which has over 69,000 subscribers. “Ma’am you are a big inspiration for those who are just beginners in cooking,” posts @zarahaya38 on its Instagram account that has about 20,000 followers.

Tassiya Bhat, the channel’s founder, gets hundreds of these messages on a daily basis. “It’s what keeps me going during this lockdown,” says the 27-year-old from Srinagar. The traction for the channel, across Instagram and YouTube, has grown fourfold during the lockdown, she adds.

In most parts of the world, people are struggling to source the right ingredients for the cuisines they want to try during the lockdown. In Kashmir, the challenges are different. “Network is an issue here, so 40% of our audience eagerly waits for the internet to come back to access our recipes,” says Bhat. She often has a workaround for the paucity of ingredients. Bhat recently posted a video showing how to make cottage cheese from eggs since it wasn’t easily available in some parts of the state. “It’s not the same thing, of course, but a good replacement,” she says. 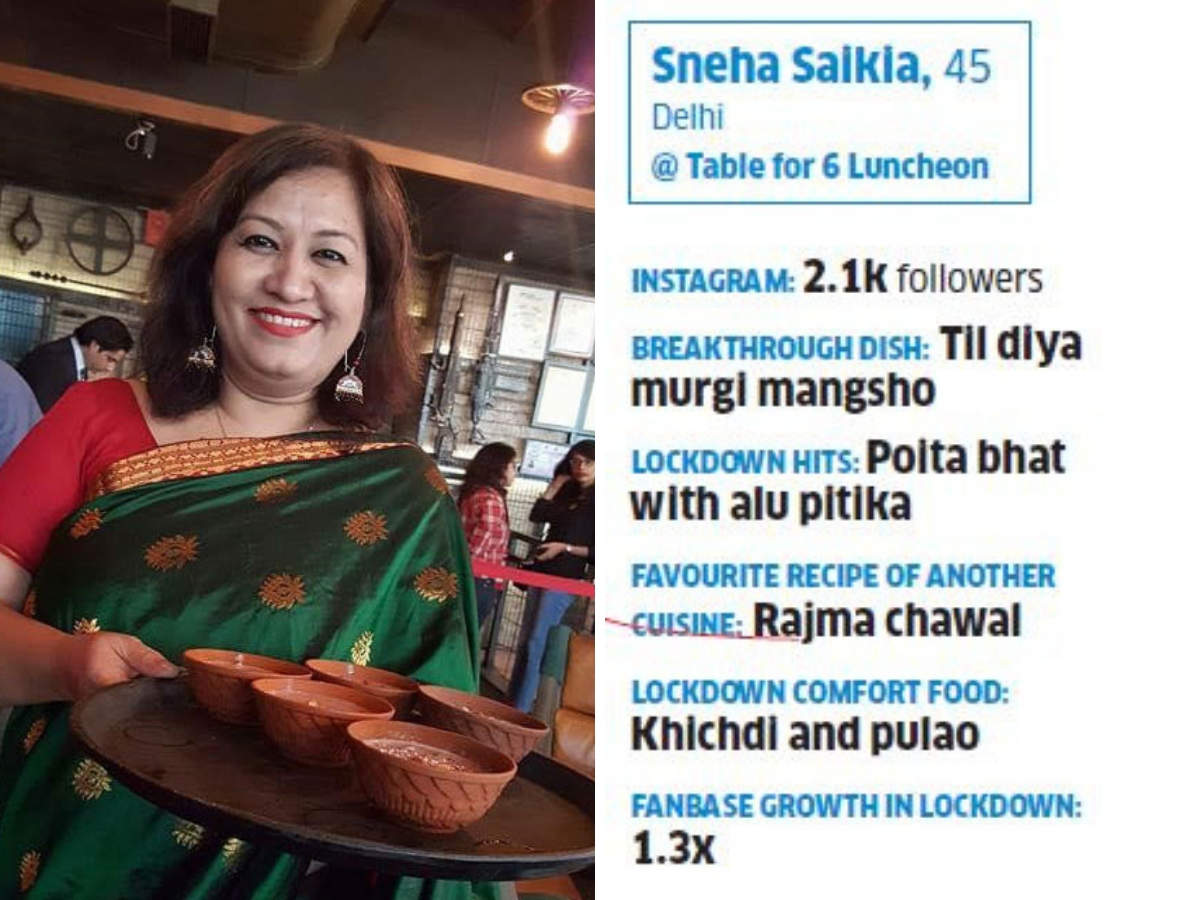 Sneha Saikia, a 45-year-old Assamese, is popular across Delhi food forums and fests for making northeastern food accessible to the people of NCR. Her venture, Table for 6 Luncheon, organised weekly events where people could taste her home-cooked food.

When the lockdown began, her fanbase, who took to cooking her dishes, asked her to help out with the recipes.

Since then, Saikia has been sharing simple recipes through short videos on Instagram. “As northeastern cuisine is herb-based instead of spice-based, it is soothing for this weather,” she says.

The shift from luncheons to videos has extended her fanbase beyond Delhi — to Mumbai and Chennai, among other cities. “Every day, 10-15 people who are not from the Northeast approach me with recipe queries.” Assamese staples like poita bhat with alu pitika are a favourite with her new followers. 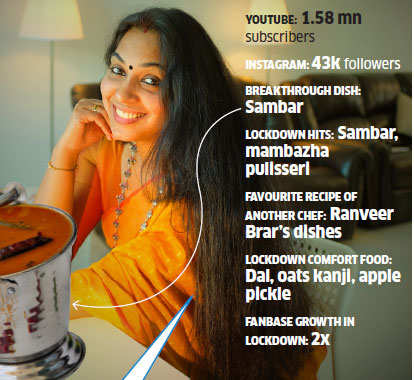 Why do celebrity chefs assume everyone knows how to cut vegetables?” wonders Leo Maveli, 34, a healthcare professional. Like many, he, too, took to cooking only recently. It’s not a choice but a chore. However, discovering Veena Jan’s YouTube channel has turned it into a pleasant journey back to his roots.

Thanks to the 40-year-old food blogger from Thrissur, Kerala-born and Bengaluru-based Maveli has been able to overcome his biggest fear: that of cooking sambar. “It’s good to know that making sambar isn’t that complicated,” he says. Jan, who lives in Dubai, has gained many subscribers like Maveli for her YouTube channel, Veena’s Curryworld, since the lockdown — over 200,000, as per influencermarketinghub. com.

“People want recipes with easily available, affordable and storable ingredients these days. So, I use more pulses, grains and flour than fish and chicken in recipes,” she says in an email interaction. Even among niche food bloggers lauded for their simple recipe-telling, Jan stands out. In an hour-long video pinned on her channel’s homepage, she talks about a series of tumultuous events in her personal life, which led to this new avatar. It has made many followers open up to her about their vulnerabilities in these tough times, she tells ET Magazine.

Jan tends to evoke polarised reactions. Some online users write her off as too chatty and boring. Vivina Vishwanathan, 35, doesn’t seem to mind. A kitchen can be a lonely place, lonelier still for the Mumbai-based communications professional who is living alone during the lockdown.

“Listening to her narration while cooking makes you feel someone’s at home and talking to you. There’s a bit of story about what’s happening in her family, with her kids. She cracks a few jokes in between. You also laugh at once.” To Maveli, it’s the little things that Jan mentions that matter. Like how it’s possible to mistake green chillies for beans. “If only I had seen that video before our in-house mishap,” he sighs. 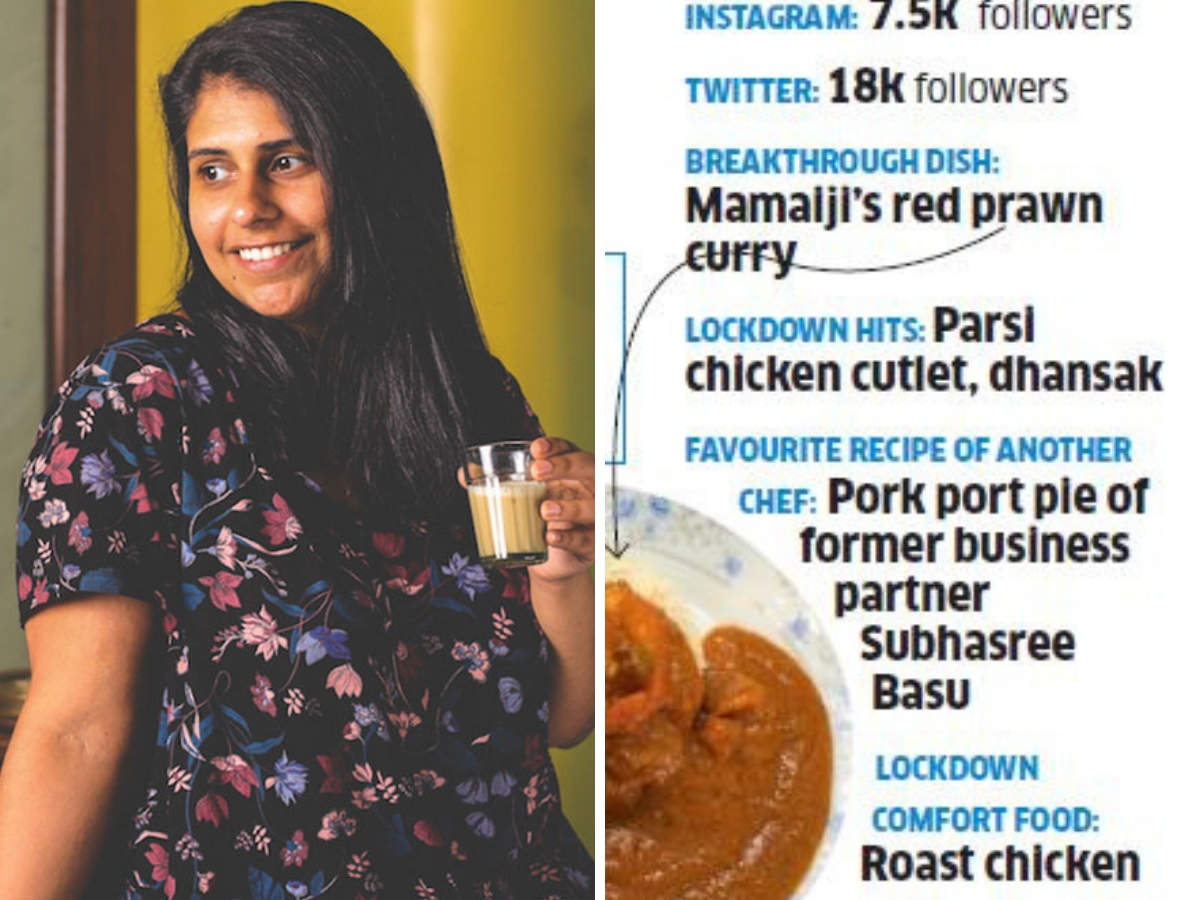 Kainaz Karmakar has never been associated with “sauntering out of the kitchen with a bowl of deliciousness unless you count ordering on Swiggy and serving it”. Cooking does not de-stress this Mumbai-based advertising professional. “Add to that the fact that my husband is a great cook and our cook Noorbanu is quite good.”

Even then, expecting her husband to cook every meal during the lockdown would have been unfair, she thought, and started looking up recipes when she found food blogger Perzen Patel’s instructions for making dhansak. It had the clincher of a line: “Don’t let dhansak be your kryptonite.” It allayed her fears.

“It broke down the mammoth task into simple steps, which even a kitchen-dummy, like me, could follow. The writing had a lightness and absolute clarity.” Patel, who blogs heritage Parsi recipes at Bawibride.com, has been getting several Instagram mentions from the likes of Karmakar since the lockdown began in India.

“There’s suddenly a lot of interest around older recipes. Someone recently asked for the recipe of audh, a coconut milk-based sweet that they remember their mother used to make,” says the 33-year-old, who is currently living in Auckland. Patel’s Parsi prawn curry is next on Karmakar’s list. 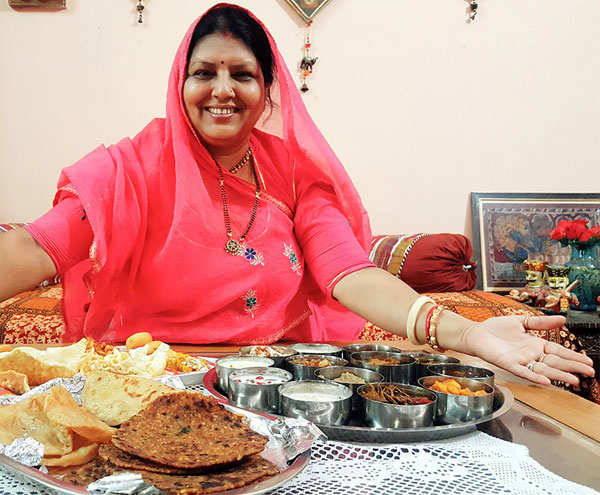 While most of her videos fetch anywhere between 1,000 and 10,000 views, the 55-year-old’s recipe for Marwari green chilli pickle has clocked around 115,000 views as of date, most of them during the lockdown.

“Overall, the channel has got 300,000 views in the last 30 days,” says Arjun, her son, who tracks the channel analytics for his mother. He noticed that even her old videos of gulab jamun and other sweets saw a huge spike in views during this period. Singh is posting fresh videos of Rajasthani sweets like kalakand and ghevar now. “People are craving for sweets as all the mithai shops are shut,” she says. “Everyone in my own family too is turning into a halwai.” 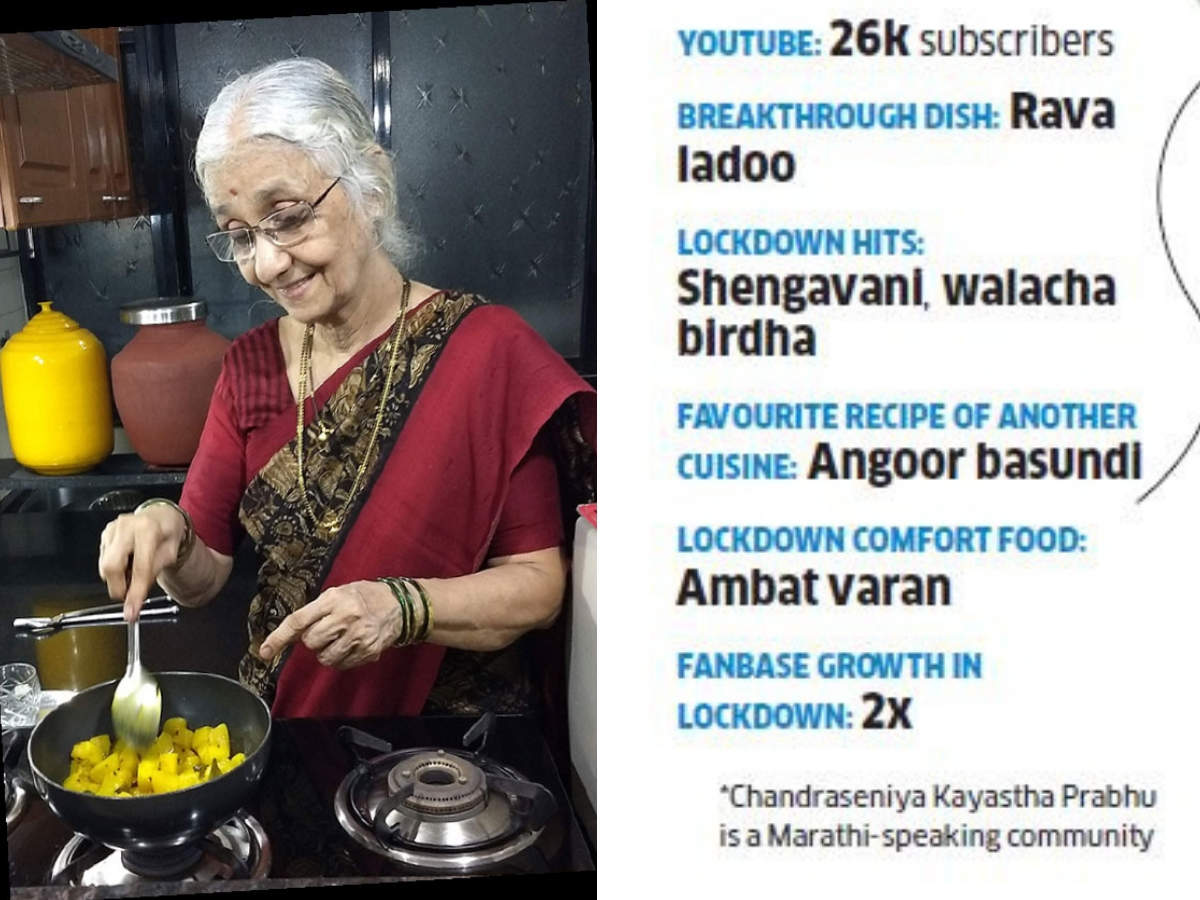 CKP is short for Chandraseniya Kayastha Prabhu, a Marathi-speaking community that takes its cuisine very seriously. In Mumbai, Shama Kulkarni, 69, runs a 26,000-subscriber-strong YouTube channel focused on CKP cooking. Since she started the channel two years ago, she has posted at least one video a week. During the last eight weeks of lockdown, though, she has managed to upload only two. “A freelancer used to come home to edit videos but he can’t now,” she says. Even then, Kulkarni has got 1,000 new subscribers since March.

Last week, several users engaged with some of her most watched videos featuring recipes of drumstick curry or shengavani, beans curry or walacha birdha, and ambat varan. These videos date back to August 2018. Kulkarni is thrilled. “I wish the CKP recipes I inherited from my mother and mother-in-law reach the next generation.” It’s a maternal connection that draws Vrinda Walavalkar towards the channel. Walavalkar lost her mother in 2016.

“Among all the CKP chefs I’ve looked up since then, Shama speaks the most like my mother. She tracks the dish every step of the way to make sure you are on the right path,” says the 58-year-old retired communications professional. “Cooking like this gives you a sense of control over things.” A rare find these days.