A one litre jar of hand sanitiser for Re 1; a personal protection equipment (PPE) set for free. Hundreds of pocket hand sanitisers for Re 1 too. It sounds too good to be true, but on Facebook’s marketplace, these unbelievable rates are up for grabs.

But naturally, there’s a catch: Hundreds, maybe thousands, of independent sellers on the social media company’s marketplace are using false advertising to reel in customers and push up their listings to the top of the marketplace page. They don’t intend to honour the sale at that price, of course. A textbook example of a “bait and switch” scheme.

Unlike other ecommerce companies, Facebook’s marketplace is unregulated and tends to be riddled with misleading listings because of the absence of a transaction layer. Essentially, it is lead generation.

ET contacted over 10 of these sellers during the course of reporting. Most of them said the prices of their products weren’t fixed and that they are free to list anything as low as Re 1 or free.

Naturally, they coughed up a new price as soon as the inquiry became more serious. From Re 1, one seller, Saran Singh (name changed), who was selling an automatic sanitiser dispenser, changed the price to Rs 7800 including taxes and delivery. 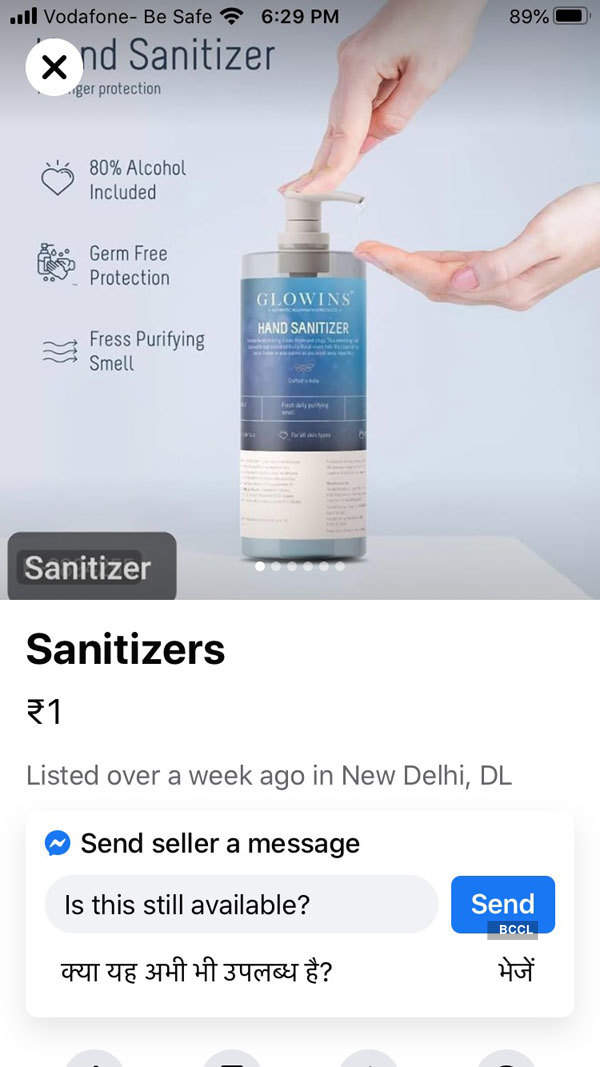 Another seller, Love Barman (name changed), who listed his pocket sanitiser for Re 1, immediately upped the price to Rs 600 (including shipping charges). 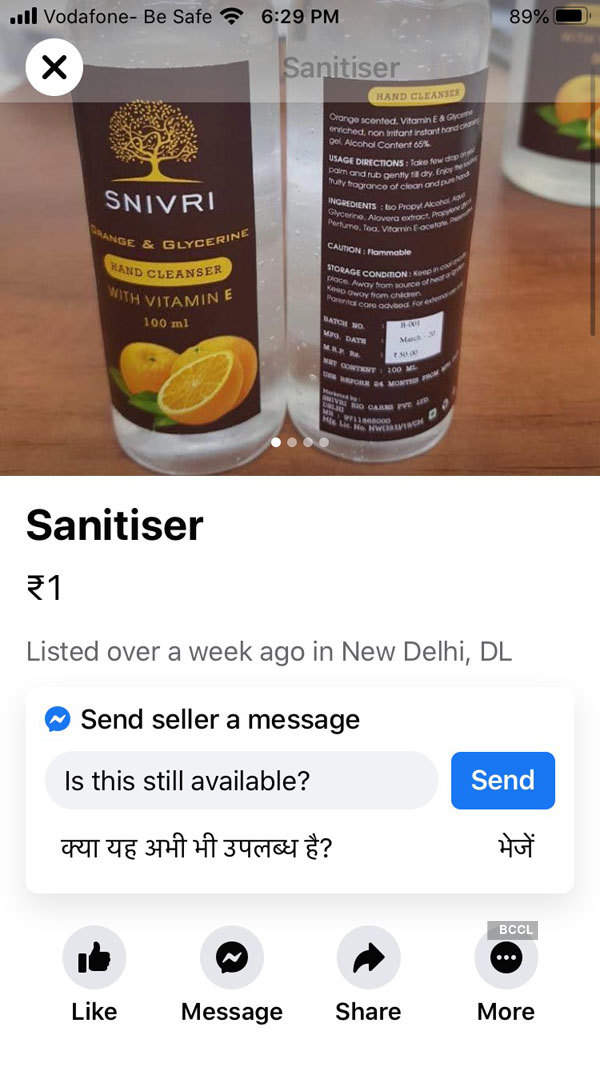 An isolation gown or a surgical gown listed at Re 1 became Rs 125 plus taxes, a non-laminated face shield, Rs 200. One seller even joked that if we found such prices, we should buy them and resell them to him.

Experts said misleading the public about prices of products or services is an unfair trade practice under the new consumer protection law of 2019, and is prohibited. 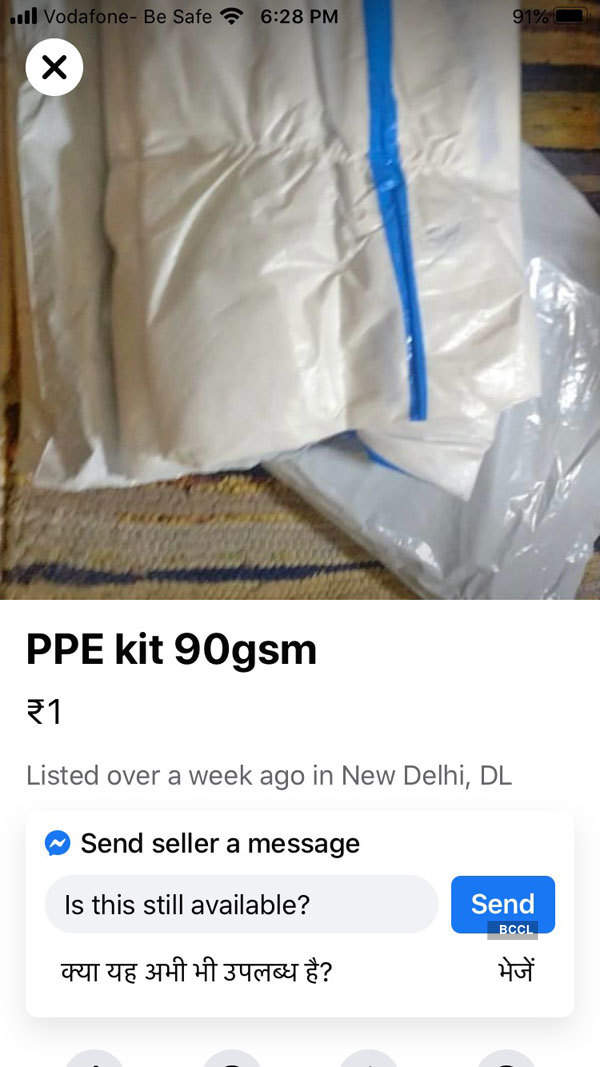 Upon being contacted, a Facebook spokesperson said it has removed millions of such ads and commerce listings for the sale of masks, hand sanitisers, surface disinfecting wipes and Covid19 test kits and that it was encouraging users to report more such cases. But even now, many such listings remain. 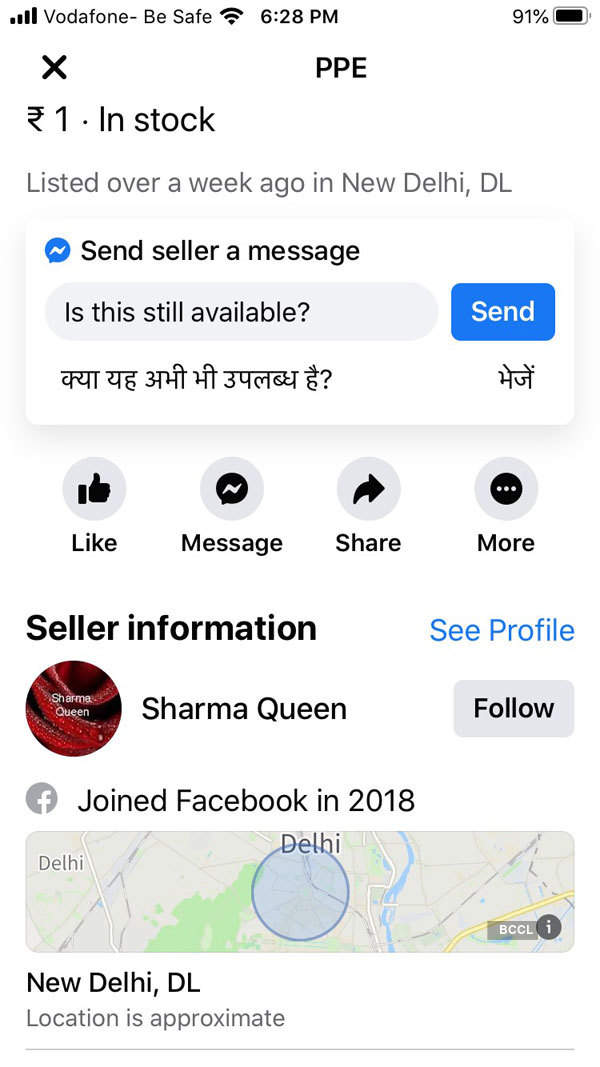 “Part of the reasons (why) we took these steps (of banning) was to better protect people from inflated prices, predatory behavior. We have put several automated detection mechanisms in place to block or remove this material from our platform and (are) always working to improve our enforcement systems” said the spokesperson over email.

This is not just an India, or a Facebook marketplace problem. Globally, a recent BuzzFeed News investigation highlighted that Facebook was still profiting from ads that were highlighting products in a category the social network had banned at the start of the pandemic — masks and hand sanitisers. It tried to ban ads selling face masks for hundreds of dollars, but in vain. Some of these have not yet been delivered.

Facebook monetises its marketplace by allowing serious sellers to advertise there. But where it faces an issue is in verifying sellers who don’t advertise and simply put their listing. “There are tens of sellers of the same product and the seller will only be able to generate interest by offering the lowest price. This may or may not be a legal offer,” said one cyber security expert based out of Delhi.