Actor Irrfan Khan’s death on Wednesday left his fans in shock. The actor was rushed to the Kokilabhen Hospital due to colon infection and breathed his last on April 29. He is survived by his wife Sutapa Sikdar and two sons Babli and Ayan. On Thursday, the actor’s wife Sutapa took to social media to pen a heartfelt message for her late husband. She updated her Facebook display picture with an adorable picture of herself hugging Irrfan and captioned: “I have not lost I have gained in every which way….”

Reacting to the post, several users paid condolences to her and her sons, Babil and Ayan. “You are strong. Love,” a user commented. Another user wrote: “Super salute to you.” Sutapa and Irrfan met each other during their college days at National School of Drama, Delhi where they fell in love with each other and later tied the knot in 1995.

Not just Sutapa, Irrfan’s son Babli also took to social media on Thursday to thank everyone for the condolences. Taking to Instagram story, Babil Khan wrote, “I’m deeply grateful for all the condolences you beautiful friends are pouring in for me. Although, I hope you understand that right now I’m not being able to reply because my vocabulary is dizzy. I will get back to each one of you but just not right now. Thank you so much! I love you”. 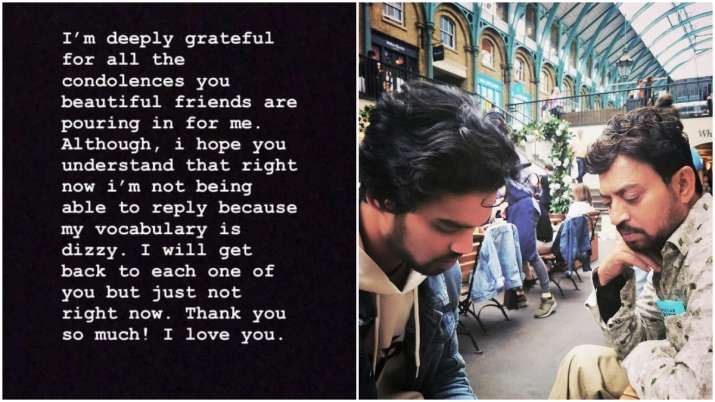 Irrfan Khan was a Padma Shri and National Award recipient and much admired for his work. An illustrious career spanning three decades, Irrfan gave many stellar performances in Bollywood as well as Hollywood films. His death has left a void in many lives including his fans who were gearing up to watch him in more films on the big screen. The actor featured in Home Adajania’s film Angrezi Medium last in March.

Irrfan Khan was buried at the Versova Kabrastan in Mumbai at around 3 pm on Wednesday.

GMB serving since 1900s It’s going to be fun to tell another story #AngreziMedium.