Incessant heavy rains accompanied by strong winds battered Mumbai and neighbouring Thane and Palghar districts of Maharashtra on Wednesday. It threw normal life out of gear, disrupting suburban train and bus services and causing extensive damage. Water-logging was reported in low-lying areas of Chembur, Parel, Hindmata, Wadala and other areas of Mumbai. According to IMD, extremely heavy rains will continue to hit Mumbai and neighbouring areas until Thursday morning.

Three high capacity cranes deployed at the Jawaharlal Nehru Port Trust (JNPT) in adjoining Raigad district collapsed due to gusty winds in the afternoon but there was no casualty. “Due to high-speed winds, three key cranes fell at one of our terminals but no one was injured in the incident,” chairman of JNPT Sanjay Sethi said.

Public transport in Mumbai and its surrounding areas, operating with limited capacity due to the coronavirus-induced lockdown, was disrupted due to water-logging on rail tracks and roads, officials said. According to Railway sources, overhead wire and equipment were damaged near Charni Road station in Mumbai due to a tree collapse and a fire caused by sparks.

The railway authorities suspended the suburban train operations between CSMT-Vashi stations on the Harbour line, CSMT-Kurla on the Main line and also between Churchgate and Kurla due to water-logging on tracks around Masjid Bunder, Kurla, Sion, Marine Line and other stations.

The Western Railway also announced on Twitter that due to heavy rainfall, all local train services between Churchgate and Mumbai Central stations have been temporarily suspended till further orders.

Bus services of the Brihanmumbai Electric Supply and Transport (BEST), the city civic body’s transport wing, were also affected due to water-logging on some roads.

A BEST spokesperson said their services were diverted on more than 30 routes, including two locations in Thane district, till 9 am. 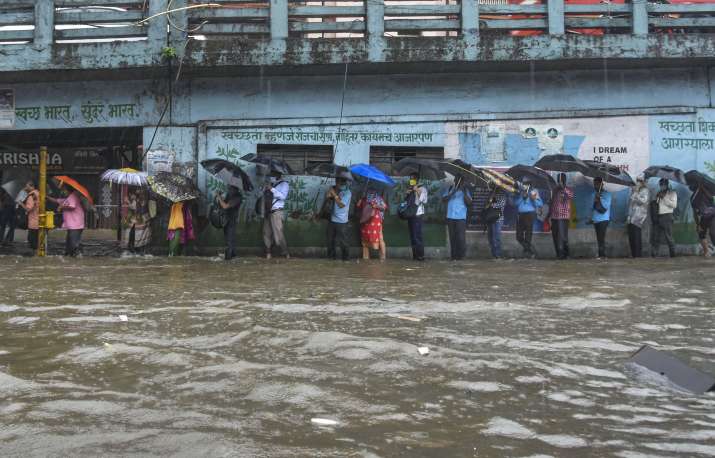 The NDRF rescued some 150 passengers from a local train stranded between Masjid Bunder and Byculla stations on the Central line. As heavy rains lashed Mumbai and tracks got flooded, another local train coming from opposite direction also got stuck near the same spot and a team has been sent to rescue the passengers. The first local train left the CSMT station in south Mumbai but could not move beyond Masjid Bunder. The other local which had come from Karjat got stuck 60 metres outside Masjid Bunder. 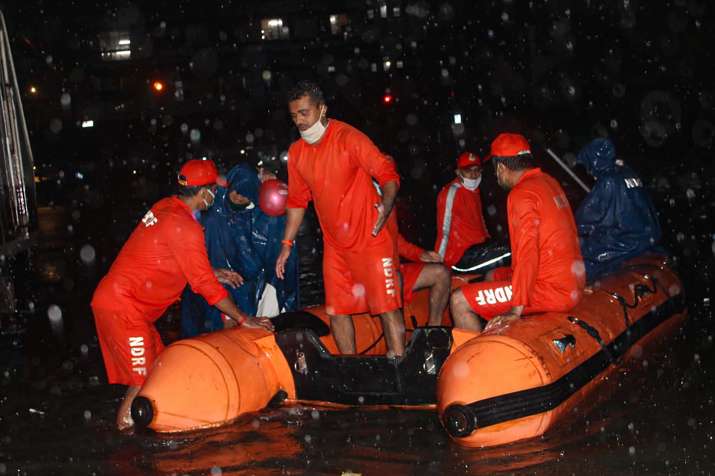 Gutsy winds and heavy rains on Wednesday resulted in the signage atop the headquarters of leading stock exchange BSE getting damaged and dangling from the iconic building’s facade. Asia’s oldest bourse is housed in the 29-storey Phiroze Jeejeebhoy Towers, which is the highest building in the Fort area of south Mumbai. The ‘BSE’ signage atop the towers broke-off and was dangling from the facade of the building, officials said, after its pictures started circulating online.

Man dies of electrocution in Dahisar

A 38-year-old man allegedly died of electrocution in an inundated area in the western suburb of Dahisar. Shambhu Jagdish Soni was found dead on the water-logged streets of Anand Nagar locality by some passersby in the morning hours. The deceased, who worked at a tile manufacturing unit,

was on his way to work in the rains when he got electrocuted. While the body of the deceased has been sent for a post-mortem, an accidental death report has been registered.

Prime Minister Narendra Modi on Wednesday spoke with Maharashtra Chief Minister Uddhav Thackeray about the prevailing situation in Mumbai and surrounding areas due to heavy rains and assured all possible support, the Prime Minister’s Office said.