Omidyar Network India is ramping up its 34-member India team amid a series of exits in the past year, a top executive told ET.

The firm earned close to Rs 300 crore from exiting just two of its portfolio companies over the last 12 months.

Omidyar Network, a rare combination of an impact as well as an active for-profit, early-stage, venture capital investor, is believed to have cumulatively invested Rs 10.8 crore in Aspiring Mind, and an additional Rs 23.8 crore in WhiteHat Jr, according to data collated by Tracxn.

Omidyar earned five times its investment from the Aspiring Minds transaction and 10-fold returns from the WhiteHat Jr deal, the largest in the Indian ed-tech sector till date.

“(Unlike a lot of impact funds) …we believe in the power of tech-led models. Exits are very difficult to predict, it takes a lot of time to get all stakeholders aligned. We believe that there are many interesting companies in our portfolio, which are poised to go to the next stage of growth whether it is getting acquired or getting into the next stage of investors,” Roopa Kudva, managing director of Omidyar Network India told ET in an exclusive interaction.

Having spun out Omidyar Network India into a separate unit last year, turning it into an autonomous organisation with a laser focus on Asia’s third-largest economy, it plans to invest $350 million over a five-year period in early-stage startups locally, according to Kudva.

This compares to an overall investment of $315 million in India over a 10-year period till date.

According to her, 14 companies out of Omidyar’s India portfolio had reached the milestone of having a valuation of Rs 500 crore or more.

Since last year, Omidiyar has also clocked partial or full exits from DailyHunt, NowFloats and U2Opia. 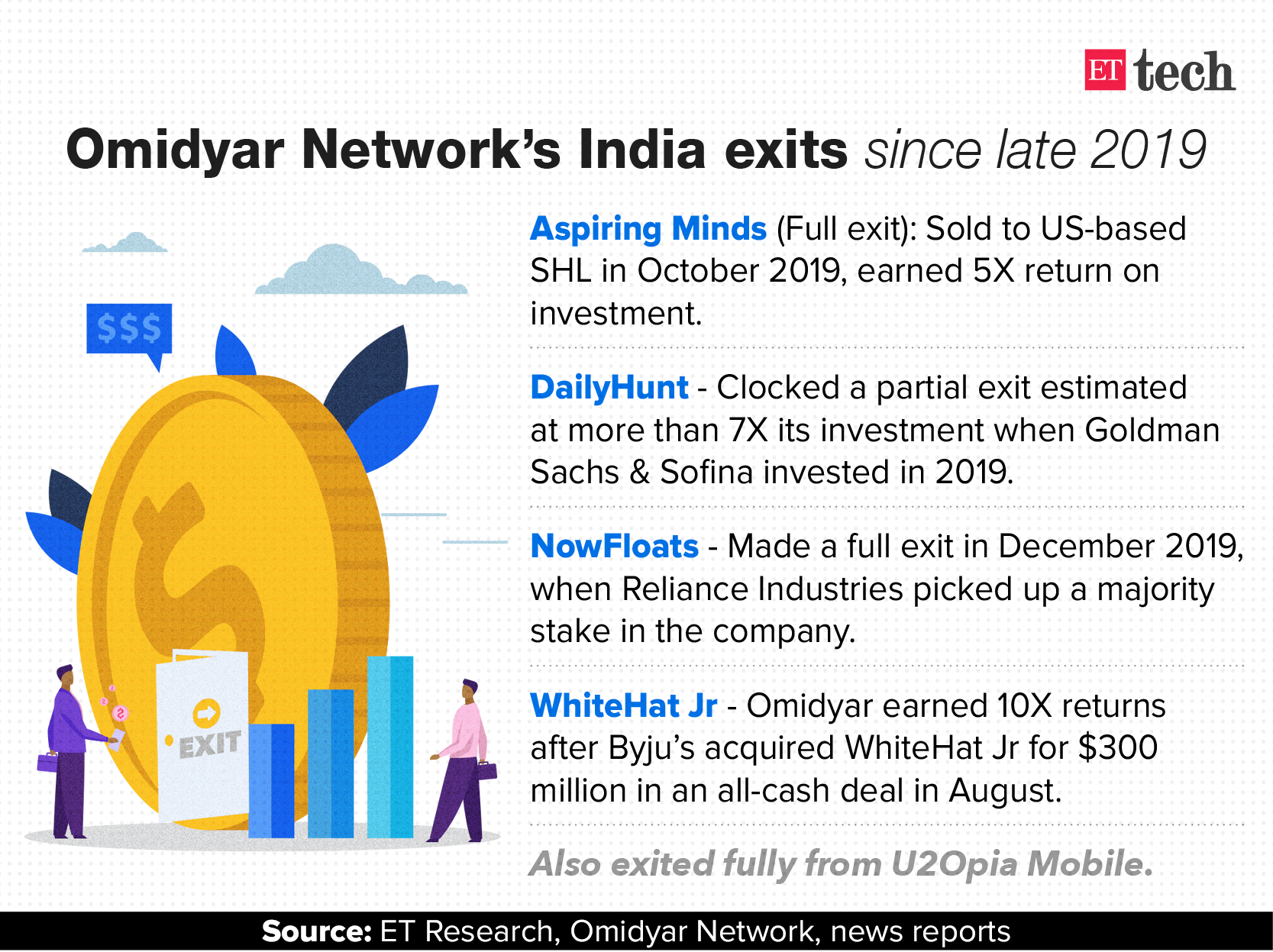 “If you look at WhiteHat Jr, it (the exit) was 18 months, Aspiring Minds was 5 years, NowFloats 4 years…In general, there is this perception that it takes 10 years in early stage investing. But for us it (all our exits across 7-8 companies) has happened in five years or less,” Kudva said.

She, however, also sounded a note of caution, saying that fundraising during the ongoing Covid-19 pandemic would continue to be difficult as investors focus more on overall portfolio management than writing new cheques.

“Overall, the guidance we are giving our portfolio is to expect valuations to be muted and fundraising to take far longer, and plan on that basis,” Kudva said.

The firm, which has been investing in India since 2009, will commit 70% of its capital towards for-profit venture investments, and has been building its local team over the last two years. Omidyar, which has 34 people on the ground, has added 14 people since its spin out in January 2019.

“Yes, we have spent the last 18 months doing that. Originally, we were a small team in Mumbai. Now, we have an office in Bengaluru. As a firm, we are 34 people, which is much higher than we were earlier. Given our large portfolio already, plus our intention of deploying $350 (million) more, we needed to build out a team. We will do some more additions, but a lot of focus in recent times has been team building,” Kudva said.