Haryanvi dancer Sapna Choudhary was blessed with a baby boy on 4 October. IndiaTV broke this news which left her fans excited and everyone wanted to see the first picture of her little bundle of joy. The first photo of Sapna Choudhary’s son is going viral on the internet. In this picture, the little munchkin can be seen in a bitter mood clad in a blue wrap around. The picture has been shared by News18 claiming that it is of Sapna’s son, however, IndiaTV does not confirm this. The baby boy definitely looks cute in the picture. 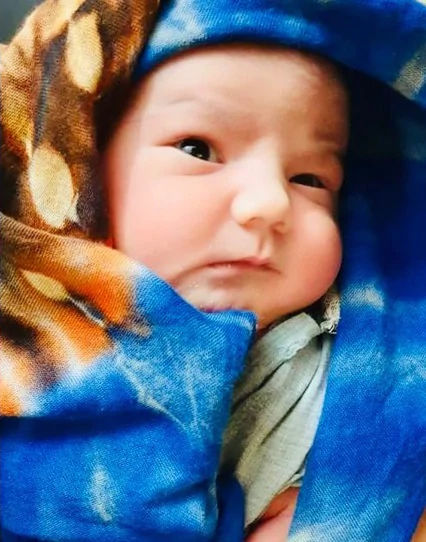 As soon as the news of Sapna Choudhary embracing motherhood surfaced the internet, her fans flooded the internet with mixed reactions. While many were thrilled, others questioned her getting pregnant without getting married first. Sapna’s husband Veer Sahu on Tuesday lashed out on trolls during his Facebook LIVE and confirmed that the couple has welcomed their son. Sahu expressed anguish over those who were questioning Sapna Chaudhary becoming a mother.

More pictures of Sapna Choudhary and Veer Sahu went viral in which they can be seen taking blessing from the elders after the arrival of their baby boy. According to reports, Sapna has been in a relationship with Veer for four years. The duo has said to have got married in March this year in a private wedding ceremony as well. On the other hand, Sapna Choudhary’s mother reportedly confirmed that the actress and Veer Sahu had a court marriage in January. After marriage, no ceremonies were done because Sahu’s uncle had passed away.

Talking about Veer Sahu, he is a singer, composer, lyricist and actor by profession and he is called Babbu Maan of Haryana. Like Sapna Choudhary, Veer Sahu is also from the Jaat community. Veer worked in the Punjabi film ‘Gandhi Phir Aay Gaye’.