The novel coronavirus spread its wings from China’s Wuhan city into the various countries leading to a world pandemic. In India too, over 67000 people have been affected by the deadly virus and many have lost their lives. With people staying back at home watching television shows and surfing endlessly on Netflix, Amazon Prime, etc, many caught hold of South Korean drama from 2018 titled ‘My Secret, Terrius’ which talked about the virus in one of its episodes. But how many of you know that a popular Indian show CID, in one of its episodes titled ‘kissa khatarnak virus ka’ showed an uncanny resemblance to today’s situation of the outbreak? Yes, that’s true. Actor Shivaji Satam, who played the role of ACP Pradhyuman reveals that it was one of the most memorable episodes he has done.

Talking to Mumbai Mirror about the CID episode which resembled coronavirus, Shivaji said, “One of the most memorable CID episodes for me was The Case of the Deadly Virus. It was quite similar to the current outbreak, in which, faced with an unknown virus threat, we needed masks and bodysuits to handle it. Of course, back then, all we could show was a vial of the fast-spreading contagion, but the premise was the same.”

The plot of the episode revolved around CID investigating a problem where the country’s population starts getting affected with a deadly virus after a pharma employee is fired and decides to take revenge by stealing the vial that contains it. The episode began with the vial’s shot and a voiceover that said, “This seemingly harmless vial contains a dangerous strand of a new virus. A kind previously unknown to man. Not only does it cause a horrifying death, but it also spreads like wildfire, taking more and more lives. The only cure for this virus is death.” In the episode it is shown how the virus rapidly spreads and transmits by sneezing, coughing, or shaking hands. 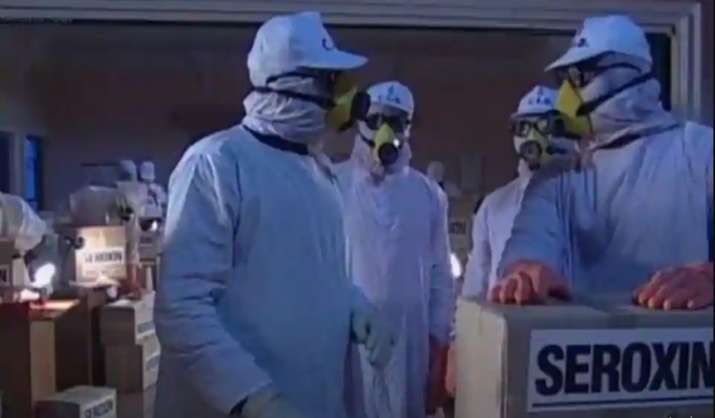 Talking about the show CID was one of the most popular shows recorded a runtime of about 22 years but was plugged off about two years back. BP Singh’s show which had actor Shivaji Satam playing the lead role of ACP Pradhyuman has been quite popular because of its intriguing and hardcore crim investigation stories.

Coming back to the Korean show, its clip went viral and shows a man telling his partner why one should stay at home and avoid stepping out later which the scene gets shifted to a hospital where a doctor explains about the mutant coronavirus outbreak which attacks the respiratory organ. Approximately 53 minutes into the episode, it shows a doctor handing over a file to another character. The doctor tells her, “We must do more research, but it looks like a mutant coronavirus.”

CORONA EPISODE … Please see this… not just a random forward…
Stop what you’re doing right now…. Go on Netflix… type in My Secret Terrius, go to Season 1, episode 10 and skip to 53 minutes 😳 actually freaked me out!!
Share because I guarantee this will be taken down… pic.twitter.com/pkj0sXfMvY

Tisca Chopra opens up on her directorial debut