It’s the first day of Lockdown 4.0 and we’ve seen companies scramble to pick up the pieces in a few states, albeit with some caveats. E-commerce, as we know it, will soon be back. Ride-hailing services like Uber and Ola have resumed operations in Karnataka. And life seems to be limping back to some semblance of normalcy despite uncertainty about the future.

How the Covid-19 pandemic will pan out is anybody’s guess. But businesses have already started charting their course head. 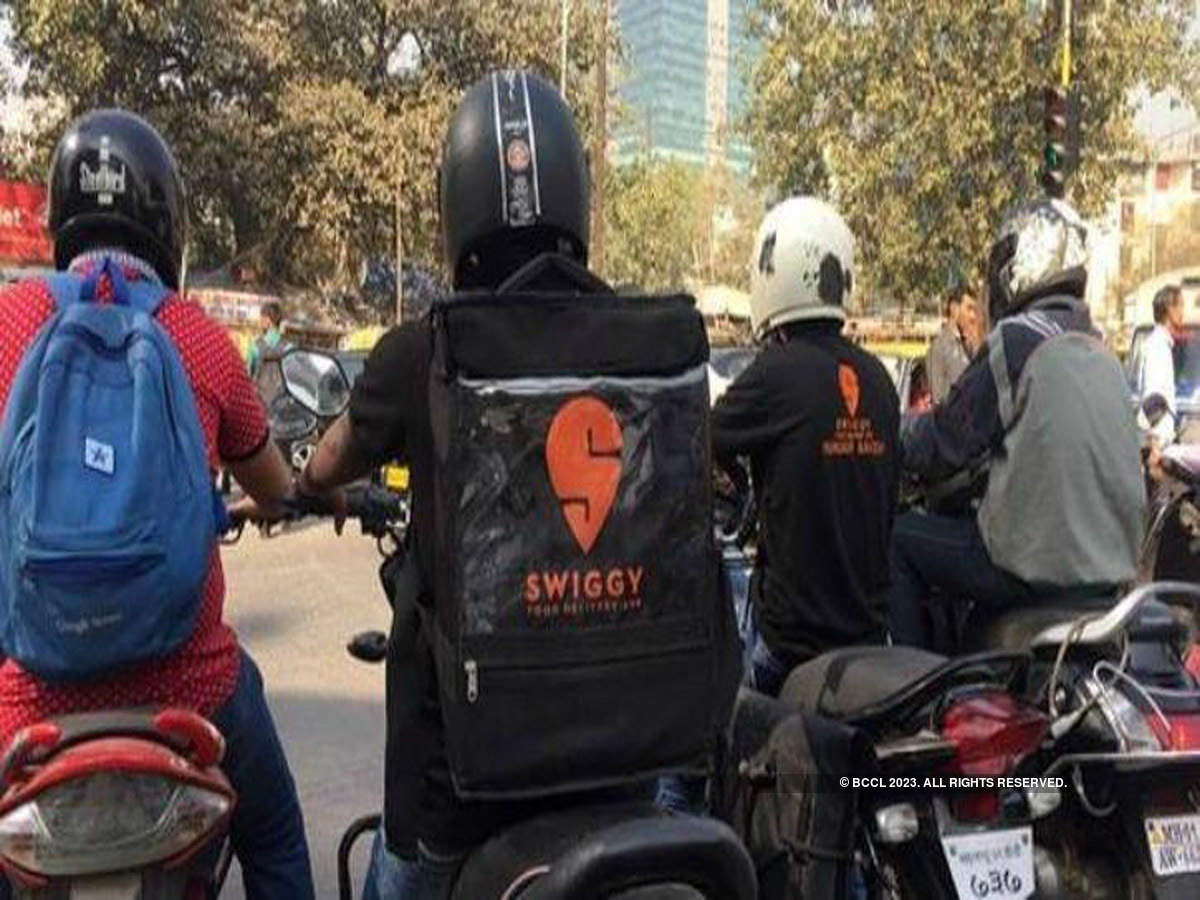 India’s largest food delivery startup Swiggy on Monday said it’ll lay off 1,100 employees. “While Covid might have long-term tailwinds for the delivery business and digital commerce when things settle eventually, nobody knows how long the uncertainty will last. We therefore need to be prepared to see through this winter, to emerge stronger on the other side,” the food ordering firm said in a blog post.

The company acknowledged that its core food delivery business has been severely affected and will stay impacted over the short term. The startup said it’ll shut down its cloud kitchen businesses as there is no clarity on order volumes.

All impacted employees will receive at least three months of salary, along with accelerated vesting, health insurance till December, and an extra month of ex-gratia for every year they have spent with the organisation, the company said. 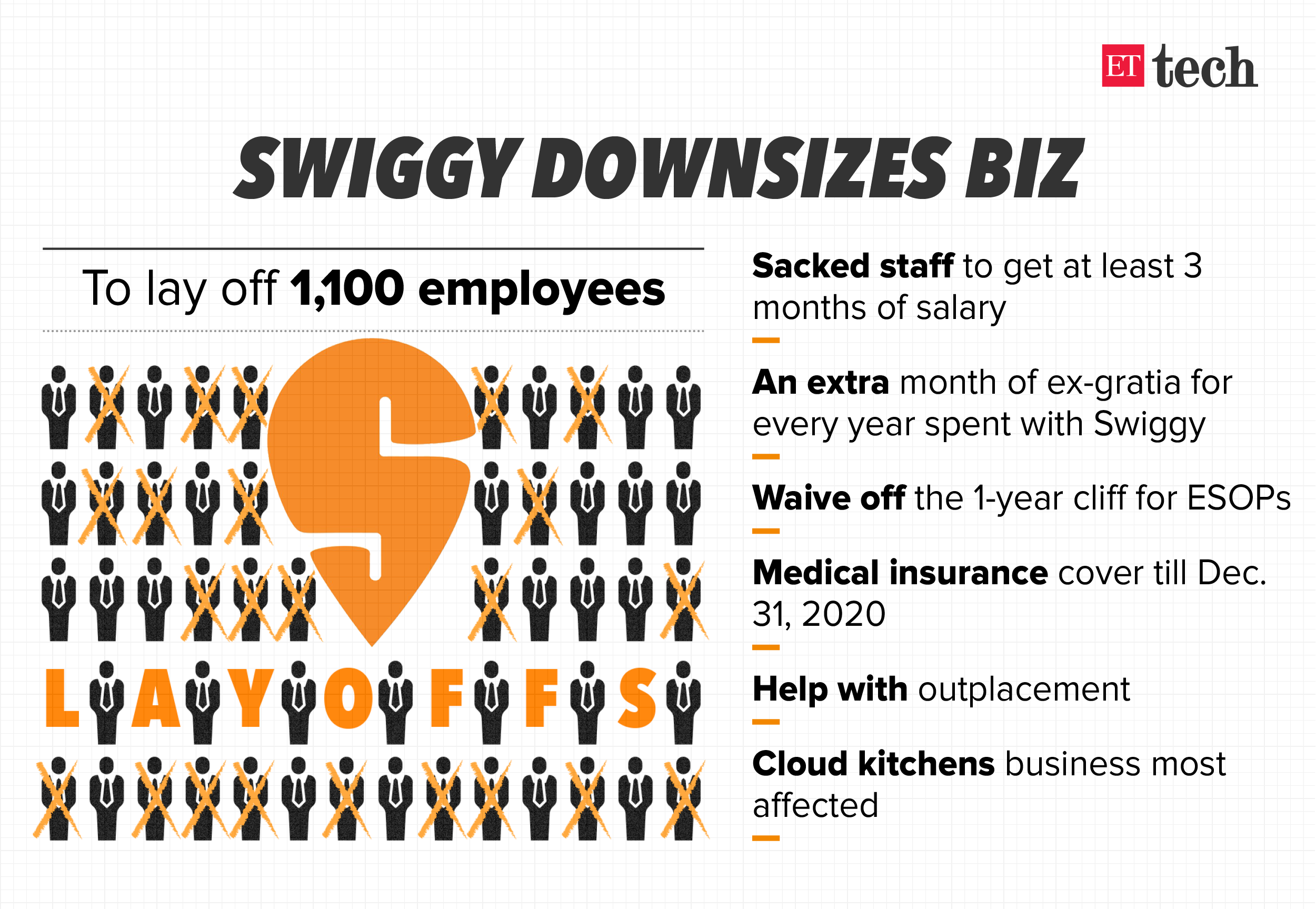 This comes days after Zomato said it will lay off 520 employees, or 13% of its workforce, and temporarily cut salaries of the rest. Read more. 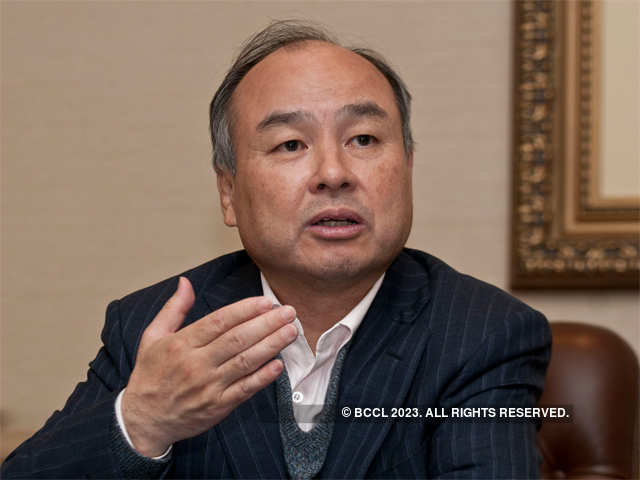 Japan’s SoftBank Group reported an $18 billion operating loss at its Vision Fund, as bets made by the Masayoshi Son-led internet giant on shared mobility and co-working went awry.

ET had earlier reported that the $100-billion SoftBank Vision Fund is on a lookout to snag new deals in India even as the spluttering technology investor grapples with a severe crisis across its portfolio companies globally.

Rajeev Misra, who oversees the Vision Fund as its CEO, had said the firm has $13 billion in unspent capital which they are in talks to deploy in India, and globally, amid doubts about the group’s ability to plough new funds into companies. Read more.

Amazon and Firstcry have begun accepting orders for all products across the country except in containment zones, even as rival Flipkart and others continue to wait for states to notify their own guidelines for reopening businesses during Lockdown 4.0. Sales of non-essential items by e-commerce firms are not in the current list of prohibited activities as per the latest guidelines. States, however, would still take a final call on allowing businesses to function based on their local needs and situations.

India has been the only country across the globe which had banned e-commerce sales and reopened physical stores. While e-commerce firms were allowed to sell non-essentials in green and orange zones from May 4, they’ve seen only a limited recovery in sales as the majority of the demand is still driven from metro cities that were closed for business due to their categorisation as red zones. Read more. 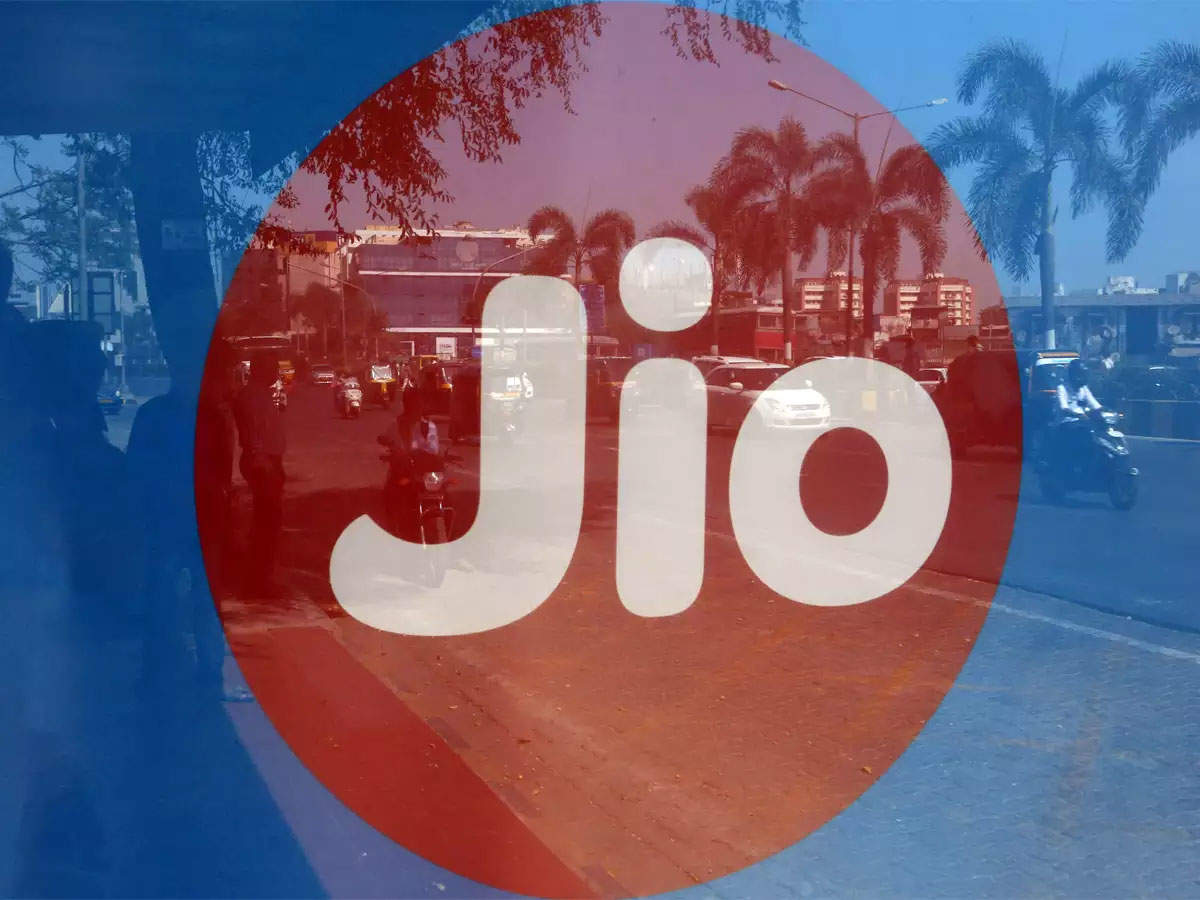 Jio Platforms, the holding company of India’s largest telecom operator, has roped in a fourth investor in less than a month. Private equity firm General Atlantic will buy a 1.34 percent stake in Reliance Jio’s parent for Rs 6,598.38 crore.

The stake sale to the US-based fund which manages $35 billion in assets globally values Reliance Industries’ subsidiary at Rs 4.91 lakh crore. In April, Facebook had pumped Rs 43,574 crore into Jio Platforms. That was followed by a Rs 5,656-crore investment by Silver Lake Partners and a Rs 11,367-crore stake purchase by Vista Equity Partners. More here. 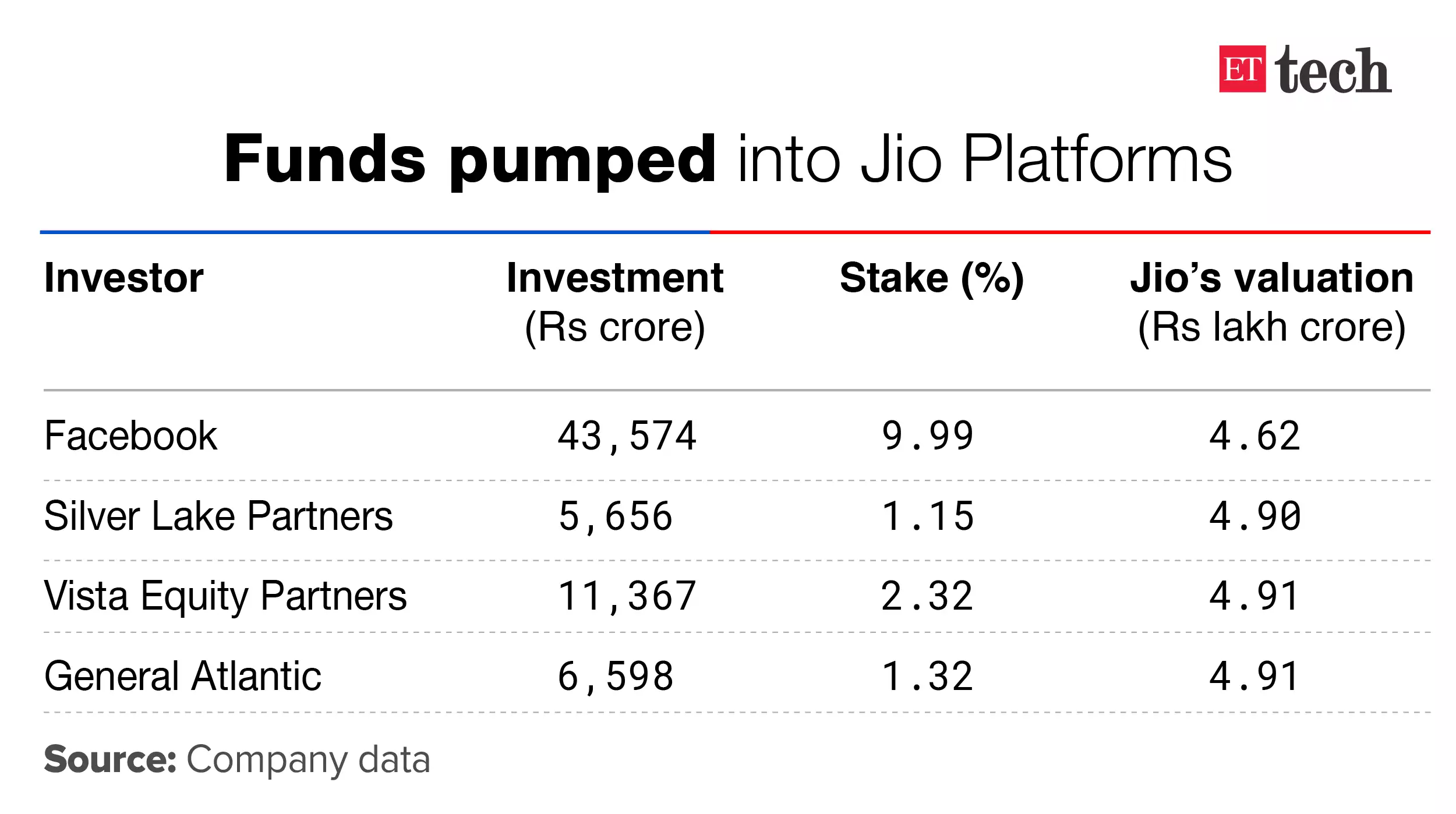 And that’s not all. General Atlantic told ET that it will be looking at opportunities to increase its stake in Jio Platforms as its alliance with the digital unit of Reliance Industries is for the long haul. 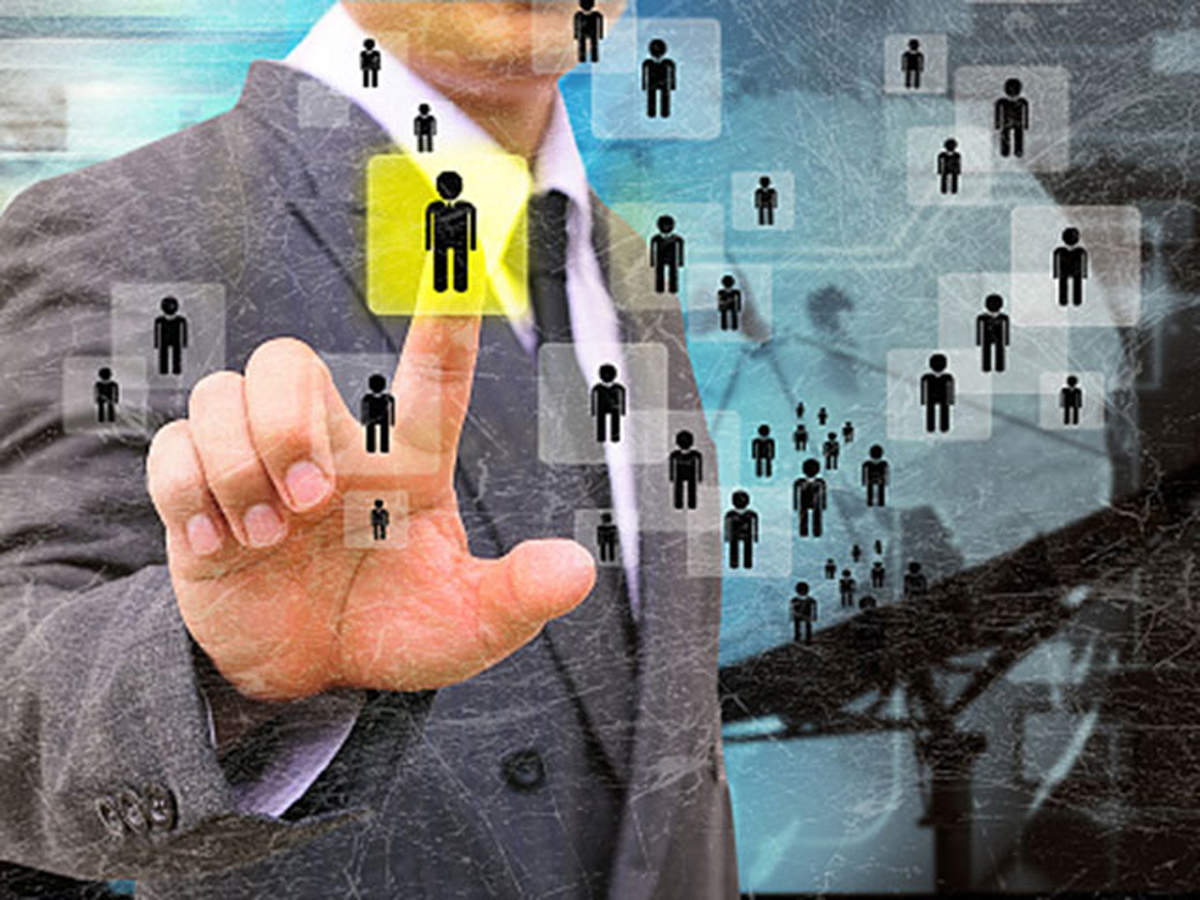 Jobseekers want to avoid sectors like travel and hospitality but are scouting for opportunities in healthcare, finance, edtech and indoor entertainment. MNCs including Accenture, Bosch, SAP and Amazon, which are still hiring, have become a preferred option for these executives.

“This pandemic has made jobseekers prefer large enterprises over startups as they have shown more resilience. The pace at which startups laid off employees and the extent to which they cut salaries have made many nervous.”
– Kamal Karanth, co-founder, Xpheno 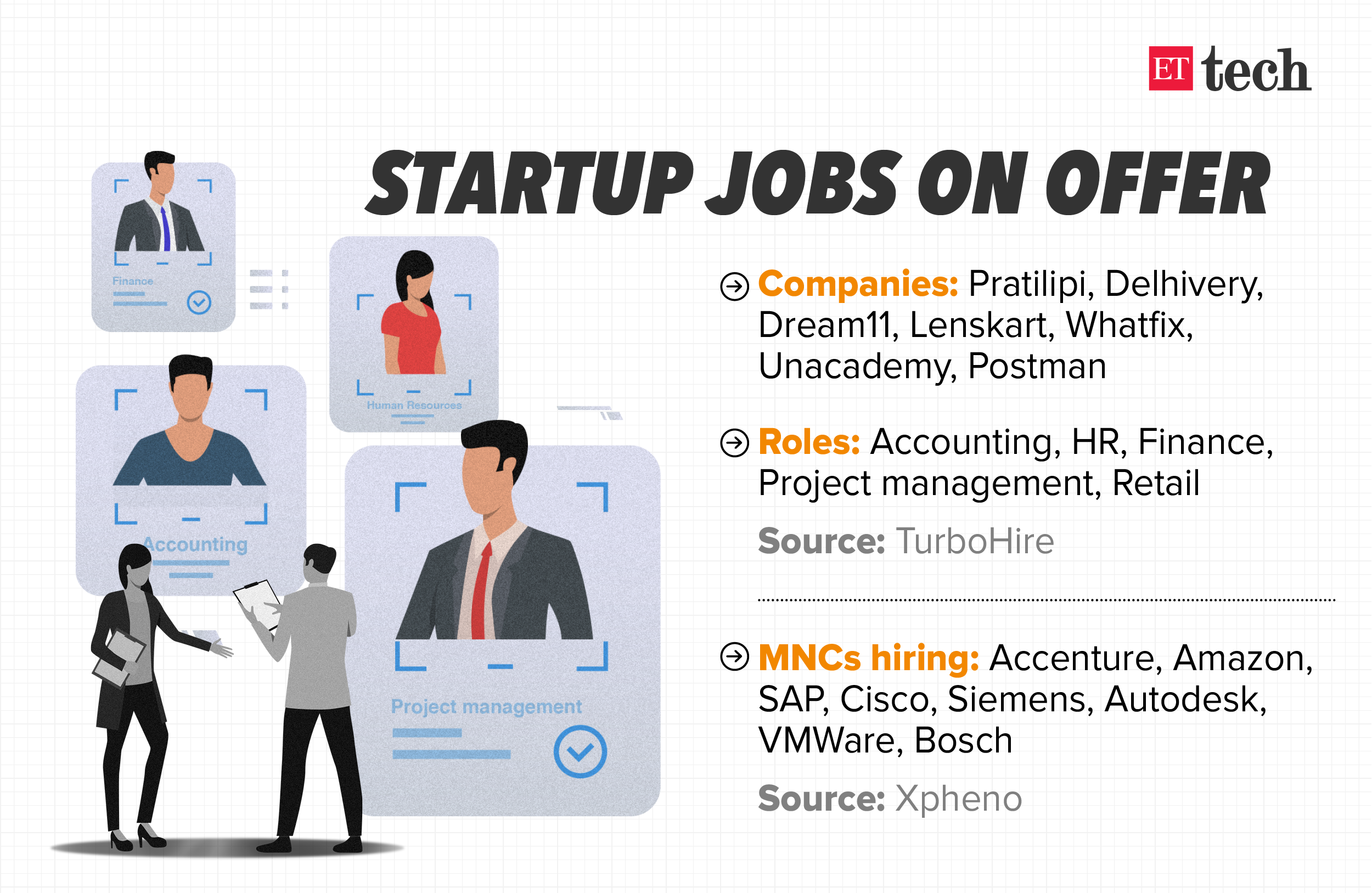 For many startups, finding the right talent may become a hurdle now as employees who have faced layoffs or salary cuts are increasingly looking at safer options, a trend that usually surfaces in downturns. Read more.