On Monday, financial services startup Cred was trending on Twitter for its IPL ad campaign which, based on social media chatter, seems to have emerged as one of the most-loved TV commercials of the ongoing IPL ad season. Cred is also the official partner of the T20 cricket league this year.

Featuring actors Anil Kapoor and Madhuri Dixit, and veteran musician Bappi Lahiri, the ads show these celebrities appear for an audition for this very campaign, and not make the cut. One of the jurors, presumably acting as the representative of the brand, eventually suggests they keep it simple and go with a voiceover for the ad that says, “Download Cred.”

The campaign is quite meta in that it uses celebrities to poke fun at advertisers’ obsession with celebrity endorsements.

What does a tech company know about ads? @CRED_club https://t.co/M4dESpbpu1

There was no audition. I was just jamming. @CRED_club https://t.co/5Ep72oz1WD

The ingenuity of the ads can be traced back to the creative minds behind them.The campaign is conceptualised by content creator Tanmay Bhat of AIB fame, who worked on it along with his former AIB colleagues Puneet Chadha, Nupur Pai, and Devaiah Bopanna.

Making celebrities do stuff they’ve never attempted in the branded content space is right up their alley. In the past, AIB had got late actor Irrfan Khan to shimmy on ‘Every Bollywood Party Song Ever’ and made him recreate funny memes, too.

When the opportunity presented itself yet again, Bhat, now an independent YouTuber, called up a few ex-teammates to write a script that makes celebrities sing and dance to the swipe of a credit card.

“I don’t know if it’s the lockdown, but most people (celebs) seemed to be on board with the idea when we pitched it to them,” says Bhat. “On the set, Anil [Kapoor] sir would gauge which joke is better and suggest to do multiple takes for that part of the script so the director has different options.”

“My personal high point was Bappi da inviting me for lunch in the middle of a take,” adds Ayappa.

Thanks to Bappi da, Bhat got his very own Indian Idol audition, albeit on Zoom call. “I had to sing a 90-seconds-long love song about credit cards to him while narrating the script. Halfway through, Bappi da suggested I share the lyrics and he’ll figure the rest. He composed the verse himself.”

On Google Trends for India, the search term “Cred” has seen a sharp rise since the launch of the campaign on September 19th, going from an interest score of 21 to 56 within a week, and looking to reach the top score of 100 by the end of this week. 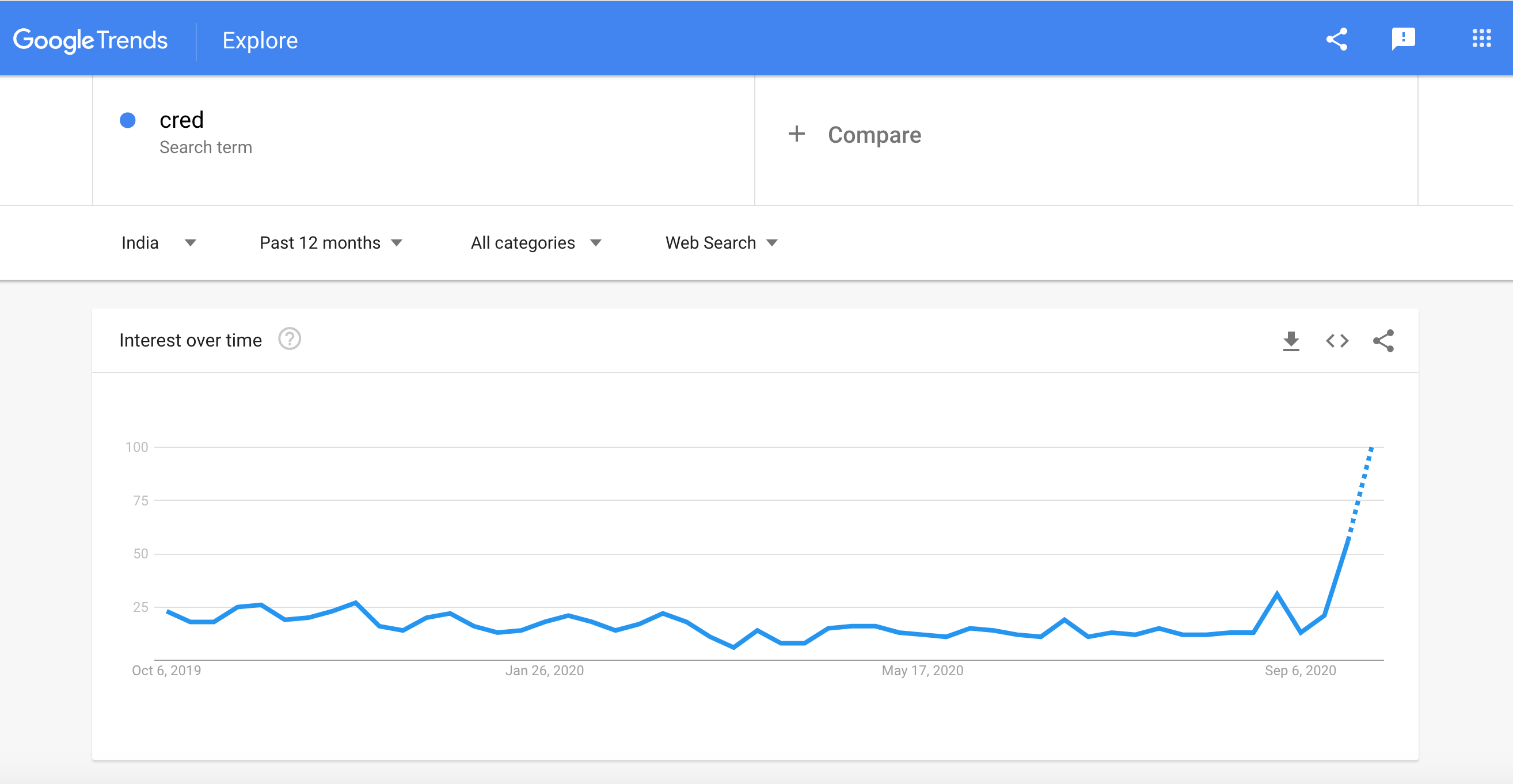 Bhat says the success of the campaign has prompted many other brands to approach him for projects in the past few weeks. “However, a campaign like this doesn’t happen without the complete trust from your client’s end,” he says. “We could make a fun campaign because we were given a free hand right from the get-go,” adds Bhat.

The ads have also received criticism from certain quarters of social media with marketing pundits questioning the objective of the campaign and whether the execution helps in achieving it, to regular folk saying they just don’t understand the ads.

Satirical or perhaps just self-aware, the campaign slogan does say, “Not everyone gets it.”

Kunal Shah, founder & CEO of Cred, did not comment on whether there will be more ads in the series after these three.

Meanwhile, speculation is rife on social media as to who would be the next celeb to fail the Cred auditions. And human-intelligence algorithms are throwing interesting results…

I wonder who might be next. Jackie Shroff (Ram Lakhan)? Chunky Pandey (Tezaab)? https://t.co/65eBu9S62c